From Oct. 17 to Oct. 31 FilAm Creative will be celebrating all things Filipino and horror. Halo-Haloween is hosted and programmed by FilAm director Walter Boholst and his new horror film “Voodoo Possession.” Contributions by Natasia Gascon and Mark Owen.

David Thomas Jenkins as Cody Chase
The fight for the 2nd male lead in Voodoo Possession was a heated contest. Several hundred applied for the role of a troubled man who tries to turn his life around but gets caught up in the web of Haitian voodoo. David was clearly a polished actor. But the dynamic required him to have chemistry with his brother and lead actor, Aiden. Even though they didn’t have a lot of scenes together they needed to be tied by background and fate. The scenes they did have together were some of the most dramatic in the movie.

David was impressive in his taped auditions and blew us away in the callbacks with his ability to be likeable and smart but also have a hidden dark side.

Horrorpedia has it’s own Filipino Horror section that features a bunch of fun Filipino horror movies, most from the 70’s. The list includes “Batman Fights Dracula.” Yeah, that can’t possibly be legal. But now I’m dying to see it.
http://horrorpedia.com/category/filipino-horror/ 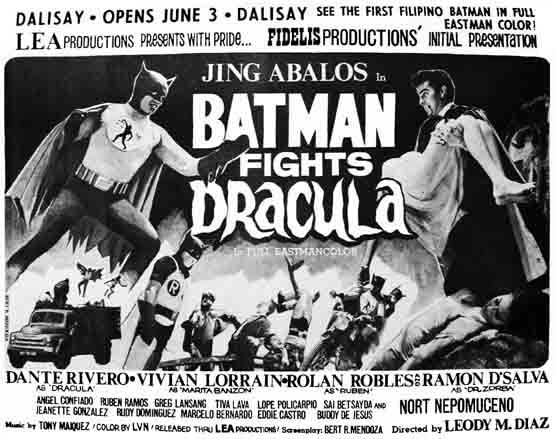 The Wakwak and the Three Stooges

My Church youth group held our Confirmation retreat at an old beach campsite that was rumored to be the home of a wakwak. Night fisherman in the area feared the dreaded creature they said had a wingspan of 10 feet, the face of a beautiful woman with rows of sharp fangs, and the strength to carry away a grown man to feast on his blood and entrails, discarding his body in the ocean the following morning.

Many a fisherman’s life was lost to the creature, they claimed, until someone discovered that if they left an offering of freshly-killed meat on a large flat rock overlooking the ocean, the wakwak would leave the fishermen at peace.

“I wonder if the wakwak is really as hot as the fishermen say she is,” said one of my knuckle-headed classmates as we left the chapel after the night’s prayers. “Stupid boys,” I said, “Of course you would care about how pretty a demon was more than the fact that it will eat you alive.”

I thought nothing more of it that night, but apparently the wakwak was all my knuckle-headed classmate could think about. Somehow he obtained a large piece of bloodied pork and convinced two of his friends to sneak out to the beach where the flat rock was. They quickly threw the hunk of meat onto the rock and ran into the bushes to wait anxiously for the wakwak to appear. They waited, and waited and waited. Finally convinced that the fishermen were a bunch of lying drunks, the boys gave up and started walking back to the campsite.

About halfway back, one of the boys realized “Hey, we should like…take the meat back with us. People might see it in the morning and we could get in trouble.” So the three stooges returned to the beach. Before they reached the meat however, a gust of wind hit the trio as a large dark shape passed over them. They dived into the bushes just in time to see the wakwak land on the rock and tear into the meat, sending chunks of it flying.

But that didn’t work. The wakwak lifted its head and spotted the trio through the dim moonlight, and with a loud screech it took to the air straight towards them.

The boys leaped from the brush and booked it back to the campsite, screaming in bloody terror as the wakwak flew after them.

In their panic, one of the guys managed to remember that wakwak could not enter holy ground, and yelled at the other boys to follow him to the chapel.

They burst through the doors and dove under the altar, where they huddled together as the wakwak shrieked in anger outside, unable to enter the holy place. The creature circled overhead many times before finally giving up, soaring away into the night from whence it came.

We found the three guys still under the altar the next morning, and it took a while for the priest to finally calm them down enough for them to explain what the hell happened.

After hearing their story, the priest shook his head and sighed, “You should have known better than to provoke a demon,” he said. “Regardless, by the grace of God and our Lord Jesus Christ you were saved from a savage fate.” He raised his hands over the boys and prayed:

“Lord God, Heavenly Father. We thank you for protecting these children from the devil last night. May you continue to watch over these young men and provide them with the wisdom and insight to never again seek out and provoke evil. Amen.” He made the sign of the cross over them and sent us on our way.

As we lead the boys out of the chapel, one guy from another youth group leaned in to the three and whispered “So…was she hot?”

I rolled my eyes and sighed. “Stupid boys!”

FilAm Creative is an all-volunteer community organization supporting Filipino Americans in entertainment and media. More information can be found at filamcreative.org, facebook.com/filamcreative and on Twitter at @FilAmCreative.

If you would like more information about “Voodoo Possession,” or to schedule an interview with Walter Boholst contact info@waltertainment.com.