Since its announcement, the days leading up to Tuesday, May 16, 2017 of FilAm Creative’s exclusive session with NBCUniversal reps and their introduction of its Talent Infusion Programs (TIPS) were filled with anticipation.

“So excited for this meeting with NBC Universal..” says Arlyn DeLa Pena.

It all started with a phone call made by AJ Calomay (currently assistant editor for USA Network’s Mr. Robot and previously with the CW’s DC’s Legends of Tomorrow). That phone call led to an introductory meeting between FilAm Creative’s Executive Director Meriden Villanueva, Chief Financial Officer Walter Talens and the curator of FilAm Creations Craig Obligacion Wilson with the Manager of Entertainment Diversity Initiatives for NBC Entertainment Grace Borrero Moss.

Moss currently serves as the Manager of Entertainment Diversity Initiatives for NBC Entertainment. In this role, she helps oversee multiple programs that focus on discovering, cultivating and showcasing talented writers, directors and actors of diverse backgrounds, with the objective of getting them staffed on NBCUniversal’s scripted programs.  She was also part of the internal Diversity Council and worked with other NBCU cable networks to promote initiatives and track diverse talent in front of and behind the camera.

Before coming to NBCU, she was the Manager of Development & New Series at the Style Network, where she oversaw new series in production, from initial pitch to delivery. She was instrumental in developing hit shows such as Kimora: Life in the Fab Lane, Ruby, Giuliana & Bill and Jerseylicious.  This was when I first met her, or at least communicated with her via work emails at our former location at Wilshire Courtyard in the Miracle Mile District.

During this time, I was with the Engineering / Media Operations Department at E! Entertainment Television (sister network to Style) from 2006 to 2010.  I was checking tapes of episodes before going on air at E! and Style.  Her tapes arrived on my desk while my notes arrived on her computer screen.  E! and Style among other networks such as G4TV, Versus, Golf Channel, FearNet and others were under the Comcast Entertainment Group, the company’s television unit, which later became a division of the NBCUniversal Television Group, after Comcast acquired a 51% majority stake in NBCUniversal from General Electric in January, 2011.

Trivia:  Vanessa Lachey was a finalist in E!’s competition to replace Brooke Burke as host of Wild On in 2007.

Grace has been actively involved with numerous organizations, including with FilAm Creative.  She was a special guest panelist when FAC and UCLA’s Samahang Pilipino, in collaboration with Pilipino Alumni Association of UCLA, presented the 3rd Annual “Filipinos in Entertainment & Media: Creating Visibility, Establishing Individuality” panel discussion and networking event produced by former FilAm Creative member Melissa Arce in April, 2014 [link].

“I’m so excited to bring members from FAC to attend an exclusive session with NBC’s Talent Infusion Programs (TIPS) today! It’s starts with awareness and exposure of their programs that promotes diversity and opportunities within NBC!” says Meriden Villanueva

As a startled and shocked Sheriff Brody sees the shark face-to-face for the first time, he slowly walks backwards ending up behind the fisherman hunter Quint, he says to him, “You better need a bigger boat..” ~ JAWS, Universal Pictures (1975).

“Five months ago, Fil-Am Creations met for the first time at Story Tavern [in Burbank], we were crossing our fingers we would get 15 people. Tonight, if the space allowed we could have had 200 peeps at our NBCUniversal diversity program meeting.” says Craig Obligacion Wilson.

He’s right.  The group that showed up inside the Comcast Universal conference room were from Fil-Am Creations.  FilAm Creative has many more members outside the filmmaker movement initiative.

Along with Moss, approaching the front of the conference room were:

Emerlynn Lampitoc who is the Director of Global Talent Development & Inclusion for Universal Filmed Entertainment Group. She works to discover new and experienced creative talent with unique and distinct voices targeting global perspectives with universal appeal. She works on programs such as Universal Picture’s Emerging Writers Program, the American Film Institute’s Directing Workshop for Women, and the Sundance Institute FilmTwo Intensive. Along with creative programs, she also works with the studio’s talent acquisitions department to find pathways into careers at Comcast NBCUniversal.

At the 2016 C3 Conference on the weekend of the Los Angeles Asian Pacific Film Festival, FilAm Creative’s Board of Directors Walter Boholst, Rex Sampaga and CFO Walter Talens met with Emerlyn; then she was with Disney-ABC’s Creative Talent Development Department where she worked on their writing and directing programs as well as staffing writers and directors on shows such as ABC’s Black-ish, Scandal​ and Disney Channel’s K.C. Undercover.​

Jandiz Cardoso who is the Director of Diversity Initiatives, has worked on pilots and series with networks including AMC, ABC, CBS, Starz, SpikeTV and MTV, as well as tentpolling films with feature studios including Disney, WB, Paramount, Universal, NewLine Cinema and Screen Gems. In 2010, she joined NBCUniversal’s New York casting office, covering all pilots, and serving as Associate on the last season of the Emmy Award winning series, 30 Rock.

Rodney To is an actor and a producer.  His credits include Rosewood, Parks and Recreation, You’re the Worst, Modern Family, Wilfred, New Girl, etc.  Rodney was inducted into Chicago’s Filipino American Hall of Fame for his work. 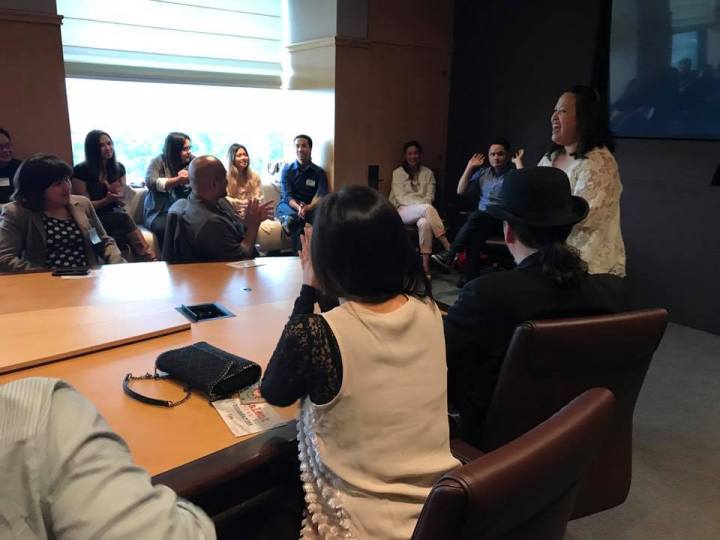 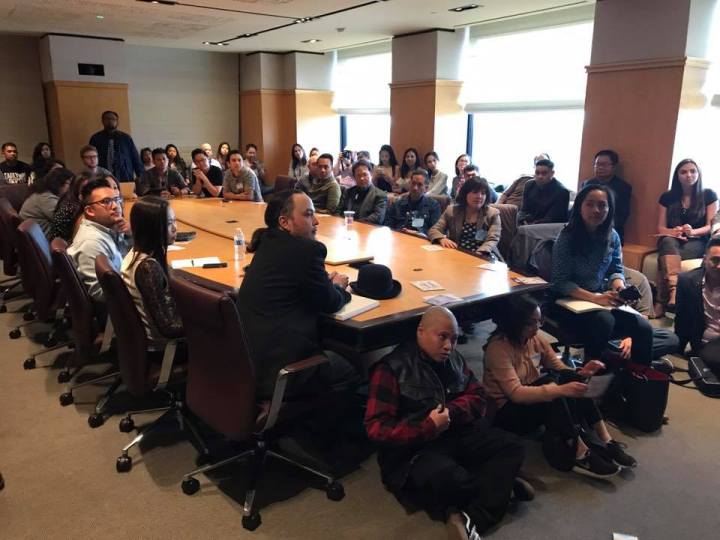 Of late, three Filipino American actors achieved success from the TIPS programs.  Ethan Dizon (soon to be seen in Spider-man Homecoming), his short film, Paulie was the Best Film and Audience Award winner at NBC Universal Short Film Festival in 2014.  He was also nominated for Best Actor, the youngest among those honored. Rodney received notice after his performance at the NBC Scene Showcase in 2015 which led him to Parks and Recreation.  And earlier this year, NBCUniversal Talent Infusion Programs named JR De Guzman winner of the 13th Annual Standup NBC nationwide search for comedians.

The conference ends with inspiration and while others are networking, others are reuniting.

Arlyn DeLa Pena says, “I had the opportunity to meet FilAm Actor Rodney To. I truly appreciated the advice Rodney gave us at NBC Universal. Thank you for your insight. I’m ready to slay!”

Rommel Andaya says, “Had a great time learning about the diversity programs at NBC TIPS with the FilAm Creative fam!! Thanks to Grace for having us!!! Grace was my mentor for the 72 Hour Film Shootout in 2015.

Walter Talens says, “Great night. Introducing “FilAm Creative” filmmakers with the NBC Diversity Department. The station that brought Filipino Americans to shows like Grimm, Superstore, Powerless, and more. Special thanks to Grace (and staff), Emerlynn, and Rodney To (Parks & Rec).  THANKS for the Portos!”

Meriden Villanueva adds, “So thankful for this informational and inspiring event especially seeing Filipinas as Director of Diversity Initiatives/Global Talent Development and alum of their Scene Showcase/Emerging Director program!”

“Let’s make history together! The Fil-Am Creative fam continues to grow! So thankful to be part of this Fil-Am Creations movement!” Meriden Villanueva ends with.

One thought on “What Happened When FilAm Creative Attended NBCUniversal’s Exclusive TIPS Session?”