Summary by Edwin A. Santos

Ever since my parents plopped me down in front of a television set as a toddler, I have noticed a steady growth of Filipino American faces and characters on the small screen.  Slow yet there was this steady increase (especially coming up from the theatre world and the international cinematic universe).  Our impact was made at the aughts. The turn of a new century meant a new direction.   The media will finally reflect the diversity of society.

According to the 2010 Census, the Asian population grew faster than any other race group in the United States between 2000 and 2010.  Filipinos were the second-largest detailed Asian group of the Asian alone-or-in-any-combination population (3.4 million).  And, of the detailed Asian groups that numbered one million or more within the Asian alone-or-in-any-combination population, the highest proportion of each group lived in California (as being the top U.S. state for Asian Americans) — the Filipino population (43 percent) had the highest proportion that lived in California [link].

FilAm Creative is a community organization supporting Filipino Americans in entertainment and media.  We also provide opportunities to meet and network with fellow FilAms who have successfully established themselves in entertainment, and who can swap and share their experiences of struggle to where they are now with you.  You are not alone.  We also addressed 2016’s heated themes of diversity and representation in both the media and IRL between the Oscars to Mail Order Family thanks to leading PhDs E.J.R. David and Kevin L. Nadal.

So, here are our list of 2016’s Notable Firsts of what we have done as an organization as well as shining a spotlight to those who have changed the discussion when it comes to Filipino American inclusion — not just in entertainment in general, but also our inclusion when discussing anything Asian American.

Coming off from one of 2015’s notable firsts, watching a Filipino American family celebrating Thanksgiving on primetime television on the CW’s Crazy Ex-Girlfriend, 2016 did not disappoint…starting with Rachel Bloom at the Golden Globe Awards press room in January.

From his Golden Globe win (sharing co-directing duties with Peter Docter) for Disney/Pixar’s Inside Out as Best Animated Motion Picture, Filipino American co-writer/co-director Ronnie Del Carmen was nominated in both Best Writing, Original Screenplay and Best Animated Feature Film.  He received an Oscar this year for the latter.

For FilAm Creative’s First Blog of our #FACinfocus series in 2016, I wanted to showcase Filipino American talent from behind-the-scenes (as they are as important as filmmakers, writers and actors).  Published in January was about television post-production editors Dexter Adriano (currently editing for Marvel’s Agents of S.H.I.E.L.D.) and A.J. Calomay (DC’s Legends of Tomorrow) – [link]

We held our First Networking Mixer at the Los Angeles Regional Food Bank in February [link].  Created and developed by 2016 FAC President Walter Talens, the innovative Good Karma Networking Mixer was an opportunity for members to come together and volunteer to help fight hunger in Los Angeles County.

Our second #FACinfocus was Another First.  My first One-On-One Interview!  FAC’s First Interview with original content coinciding with the premiere of an upcoming CW television episode our subject penned.  Our February 25th entry was an extensive interview with the executive story editor and writer on DC’s Legends of Tomorrow, Ray Utarnachitt [link].

My interview with Ray was shared across social media including actress Ciara Renée (who played ‘Hawkgirl’ on last season’s DC’s Legends of Tomorrow) as well as fans of the TV show and comic book fans in general. 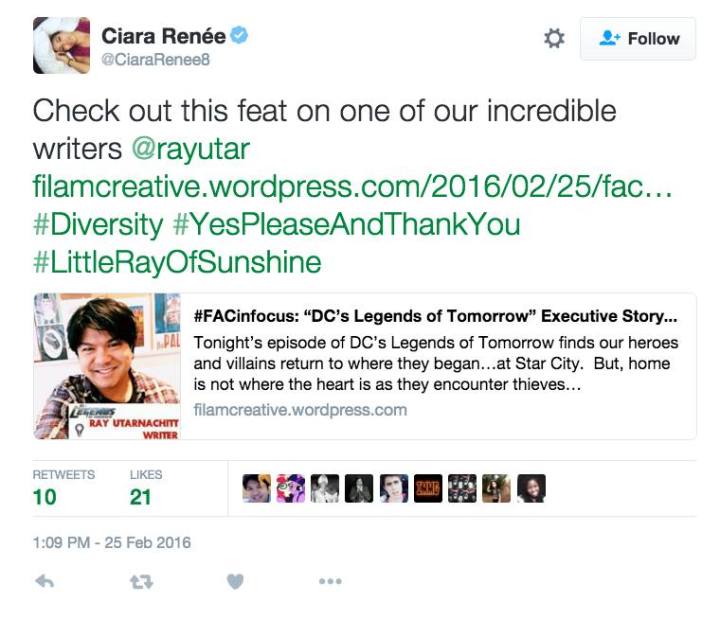 This interview led to more requests from both talent and / or their managers for their upcoming projects.

So, in March’s #FACinfocus series, I conducted extensive interviews with They’re Watching producer Mark V. Lagrimas [link] and composer Jonathan Wandag [link] before their film was released nationwide in theaters, Netflix and VOD earlier this year.

In April, Karla Garcia became the First Filipina-American member to join the cast of Hamilton, the Pulitzer-winning Broadway play.

In May, Jaclyn Jose, the star of Filipino auteur Brillante Mendoza’s Ma’ Rosa, took home Best Actress honors at the 2016 Cannes International Film Festival.  She was the First Filipina to do so.

Also in May, Ali Ewoldt became the First Asian American and the First Filipina American actress to lead Phantom of the Opera on Broadway and H.P. Mendoza is the only Filipino American filmmaker listed on BuzzFeed’s 28 Asian-American Filmmakers You Need To Know [link].

Later in May, lightning struck twice with two all-Asian American comedy improv shows. Starting with Scarlet Johansson Presents: Asian American & Pacific Islander Heritage Month. Created and hosted by Will Choi and Keiko Agena (Gilmore Girls), it was the First of its kind to debut at the Upright Citizens Brigade Sunset’s Inner Sanctum Cafe.

A reported 300 people (including many members and supporters of FilAm Creative attended and performed that night as well as I videotaping the show hence the first screencaps posted below) arrived to see the best in Asian American improv and comedy in Los Angeles with the following three teams.  Even Tilda Swinton (Jenny Yang) was there!

As a result, UCB Sunset offered a spot on their rotation schedule to put up an Asian American improv show on their Mainstage.  Choi with Mike Lane premiered Asian AF in November to an equally fun-filled sold out night!

Later in June, FilAm Creative hosted their 7th Annual Filipino Heritage Dodgers Night at Dodger Stadium on the night of June 17th.  And, I conducted an experiment…I wrote the related blog [link] in real time while at home listening to the game on the radio and scouring for photos, videos and Instagrams online to embed and post. The rest of the FAC staff was there (below) at the game.  You could say, this was FilAm Creative’s First Time Blogging in Real Time an event while it was happening. Live-to-blog.  I published the blog at 10:30pm on the night of June 17 after the game, but WordPress stamped it at June 18th.  Go figure.

Also in June, Filipina American voice actress and Zootopia screenwriter, Josie Trinidad is listed as one of the Los Angeles Times’ 100 People who could help fix the Academy of Motion Pictures Arts and Sciences’ diversity problem of the Academy Awards [link].

As a result of FAC’s 2nd Actors Panel & Networking Event on June 4th, one of the panelists referred me to a blog written by actress Aina Dumlao titled, Dear Manager X [link].  It’s a good read where many minority actors have faced early in their careers.  It is also interesting to note that she has progressed since writing that blog.  She recurred on CBS’ Macgyver this season.

In August, to coincide with Bidyo’s new web series Filipino American Hall of Fame, I wrote my first First Person blog for FilAm Creative titled, Self Acceptance vs. Self Denial: This Is My Filipino American Story [link].  It was shared across social media by the Filipino American National Historical Society (based in Seattle, Washington), Asian American Life (based in New York) and actress Sophie Mackenzie Nack (of NBC’s Truth Be Told) who was one of the subjects of the blog (below).

Also in August, for the First Time, we were one of the sponsors of the Comedy Comedy Festival [link].

Later in August, CBS’ Elaine Quijano made history becoming the first Asian American and First Filipina American to host a political debate.  She is also the first digital news journalist.

In September, Bidyo’s new episodic web series, Filipino American Hall of Fame premiered on YouTube [link].  Bidyo is a YouTube channel devoted to showcasing original content created by, or for the Filipino American community.  The #FAHOF web series was written, directed and produced by John Flores and Craig Wilson and stars Jaclyn Hernandez and Tony Garbanzos.  They met at our First Actors Panel in 2015.

Also in September, to coincide with Bidyo’s new web series Filipino American Hall of Fame, I wrote my second First Person blog for FilAm Creative titled, Filipino American Representation: Moving Forward [link].  The blog was shared by #UnderratedAsian on Twitter, a social media movement that celebrates and draws attention to Asians, Asian Americans, and Asians in the diaspora that may not be well known, in order to educate and inspire people in and outside of the community.

2016 has accelerated forward nonstop as we continued to promote and support Filipino American talent in the trenches of Hollywood.  October has just begun and our annual celebration of Filipino American History Month didn’t even begin … when an unexpected speed bump suddenly appeared!  And, once again, we were reminded that there is still much to do! 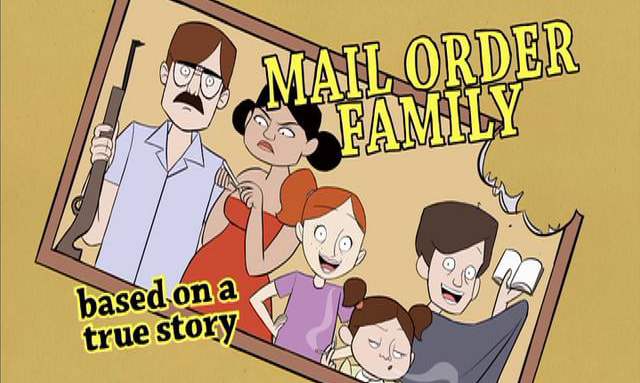 Later in October, Addison Russell of the 2016 World Series Champions, Chicago Cubs became the First Player of Filipino American descent to hit a grand slam in a World Series game. He hit the 19th grand slam in the history of the World Series in the sixth game and also tied a MLB record of 6 RBI by one player in a game on a team facing elimination from the fall classic.

Also at the same event, we joined SnapChat for the First time thanks to Angela Paviera!

And the First time we live streamed one of our events thanks to Rodney Cajudo and Wynston Fernando!

Where shall 2017 take us?  Only you – our members, our volunteers and anyone interested — can help determine what FilAm Creative can offer!  What ideas do you have?  What can you bring to the table?  We’re listening.  Let us know!  If interested, contact us at filamcreative@gmail.com and let’s bring forth Filipino Americans into the New Year!