LOS ANGELES, CA (June 18, 2014) – The who’s who in the Filipino comedy world joined forces in Hollywood last week to bring big laughs to a packed house at The World Famous Comedy store on the Los Angeles stop of The Filipino Comedy Tour on Wednesday, June 11, 2014. 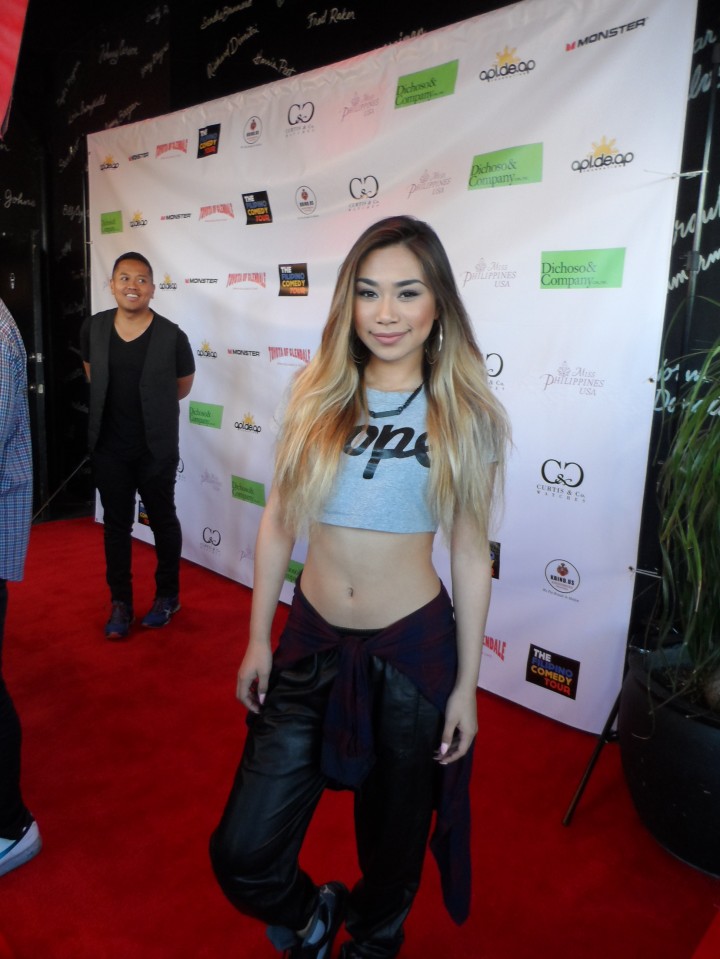 Jessica Sanchez shows her support on the Red Carpet.

This show put the “FUN” in “FUNdraising” as part of the proceeds were dedicated in support of the Apl.De.Ap Foundation, an organization committed to giving back to communities and children within the Philippines and Asia with a focus on education and technology.

A truly entertaining night was missed if you were not in the audience. Here’s a brief recap and order of events of the show:

– What started off as a traditional rendition of the “Star Spangled Banner” turned into a quick breakdancing session and ended with the unofficial Filipino dance anthem, “Bebot” by the Black Eyed Peas.

– Comic Michael Quu kicked off the night with a short but sweet set that set the tone.

– Guest host Manny Streetz jokingly made his debut on stage as a rapper and proceeded to provide comedic introductions of the other comics throughout the night.

– Justin Rivera separated himself as the “Comedian/Magician” as he humorously performed magic tricks while telling jokes and bringing a member of the audience on stage for an impromptu ventriloquist act.

– One of the biggest highlights of the night was comedian Kevin Camia, who had full command of the stage and engaged the crowd with his witty accounts of getting bullied and sexual mishaps.

– Dante Basco provided a poetry break with two powerful spoken word pieces that impressively quieted down the room in an inspiring manner and not one that dimmed the mood.

– Possibly the most all-around entertaining set of the night was delivered by Joey Guila, who showed off his dancing, beatboxing, and accent immitation skills alongside his undeniable amusement factor. Joey also brought many members to a standing ovation.

– Comic Keith Pedro entered with an abundance of profanity and jokes about nearby members of the audience. He made it clear that he’s able to do improv comedy…while wasted!

– The show’s closer, Ron Josol, made it clear why he was featured in a comedy spotlight on NBC’s “Last Call with Carson Daly” in March 2014. His balut scam story, references to what “back in the day” means, and cracks about growing up Filipino were a hit.

For more information about The Filipino Comedy Tour and upcoming shows, visit: https://www.facebook.com/TheFilipinoComedyTour.